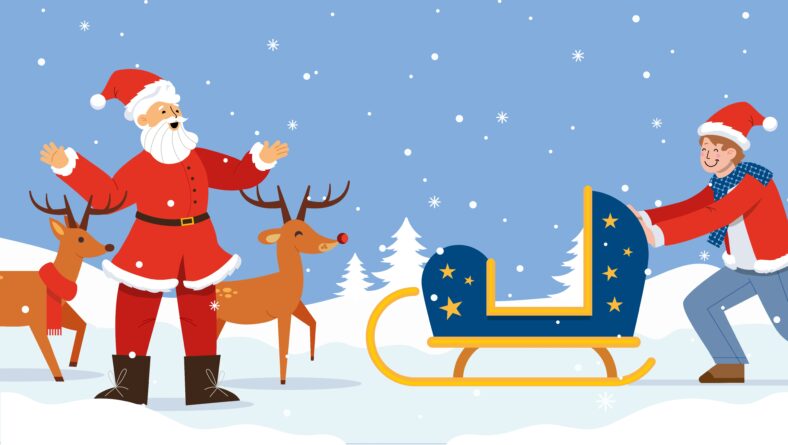 Episode 6: Did all the hard work from CORE, HUB, Chrissy the claims handler, Ellie, the elves, Santa and Mrs. Santa finally pay off? Will all the children of the world find a present under their tree and be able to celebrate Christmas after all?

Ellie the elf was quick to react when Santa called her name. “Yes, Santa,” she responded, and with what felt like a “whoosh”, she was standing in front of Santa.

“Ellie, we need to go to something called ClaimShop to order new presents to replace the ones that were stolen,” Santa explained.

“ClaimShop? Is that a webshop?” Ellie replied.

“Yes, it is a webshop where the money from our claim is transferred to so we can order all of the presents at one time in the same place. We even get a discount if we buy through the ClaimShop, so the children will get even bigger presents this year. Come on, dear. Hurry. There is no time to waste!” Santa called while half walking, half running to the computer in the elves’ house.

Ellie wrinkled her little elf’s nose. Though knowing what a webshop was, Ellie would never have imagined Santa proposing it for Christmas presents. Usually, Santa and all of the elves took great pride in making the presents themselves in the elves’ craft shop, where they spent most of the year preparing for the many different wishes from the children of the world. However, with all the presents now stolen, and no time for making new ones, maybe buying the presents would be okay this year.

Meanwhile, with the magic CORE had done to Candyland Insurance Company’s software, the information for each present had now gone through the system, and with the help of ClaimShop, the presents could be ordered in no time and be delivered at Santa’s house, so the elves had time to wrap them all nicely before Santa placed them under the Christmas trees. Ellie placed the orders in ClaimShop while finding herself impressed by the variety of different types of things she could find in there. Toys, electronics, children’s clothing. Everything that the children had wished for was to be found in ClaimShop, and it was even easy to order.

Watching Ellie’s efficiency in ClaimShop and the smile on her face getting bigger and bigger as she worked her way through the list of presents that needed to be ordered, Santa finally felt his heart becoming light again, and he started whistling, “I’m dreaming of a white Christmas” in a jolly tone.

“Ho ho ho..” Santa laughed while Mrs. Santa came out of the house.

“HUB just called. He is on his way with your new sled,” she said with a smile on her face while hugging Santa. “Looks like it will be Christmas this year after all…”

And so, with the help of HUB, the optimist with an extensive network, and CORE, the hardcore software wizard, Santa made it through December and managed to get his stolen sled and presents replaced in time while Chrissy, the claims handler, had time to enjoy Christmas with her family while all the children of the world found a present under their tree at Christmas night.

The winner of this week’s contest will be notified directly.

From all of us to all of you, we at Scalepoint wish you a very Merry Christmas.