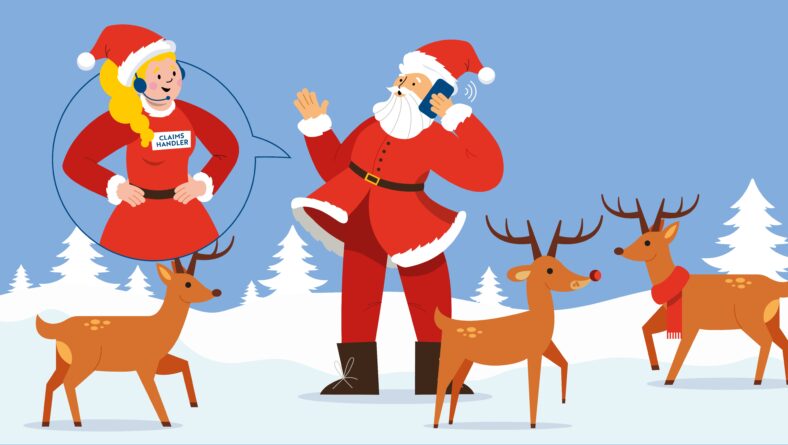 Episode 5: Will CORE be able to automate the claims handling so they can make it time? Will Chrissy be able to get some sleep? And will Santa be able to collect replacements for all of the stolen presents so all of the children will have a present under their tree at Christmas?

While HUB, the carpenter, was working on a new sled for Santa, and CORE was automating Chrissy’s claims handling system at Candyland Insurance Company, Santa was thinking about how he could collect replacements of all of the stolen presents, so all children could get a present on Christmas Eve.

He went to the reindeer paddock where he often sat when he needed to get good ideas. He knew that some of the elves also used the place from time to time when they thought about new ideas for presents for the children.

As he approached the paddock, Santa’s phone rang.

“Hi, Santa, this is Chrissy. I have some great news for you!” the voice on the phone said in a jolly mood.

“Yes, I AM happy, Santa. As it turns out, CORE is not only a wizard at automating our claims handling system. She has also digitalized many of our processes, so now we can get our systems to talk to each other while they have also become easier for our customers to use,” Chrissy explained.

Santa was happy to hear that CORE had been able to help Chrissy so her job would be easier going forward and that she would have happy customers, but truth be told, he was not much of a software expert himself and didn’t quite understand most of the modern technology. Everything went so fast nowadays. The only piece of electronics he had really grasped was the mobile phone, as he found it effective when locating the elves, and because he enjoyed the short but loving text messages that Mrs. Santa often sent him during the day. Sometimes they even had Christmas trees or candy cane emojis in them which she knew would make him laugh.

“Santa, here at Candyland Insurance Company, we now have a webshop. It is part of the ClaimShop solution that CORE set up for us.”, Chrissy said.

“ClaimShop? Yes, I remember that CORE mentioned that. ClaimShop… What kind of a peculiar name is that?” Santa replied.

“Well, aside from helping us handling the claims faster, it is now also a webshop where all of the money from your claim goes into an account, and you can then order replacements directly from the webshop,” Chrissy explained.

“It does,” Chrissy continued. “But the point is that now that CORE has made our systems work together, the money from your stolen presents goes directly into the ClaimShop. This means that we save even more time on handling your claim, and because we have a lot of different types of companies hooked up with ClaimShop, you can order the replacement presents in one single place rather than you and the elves spending time on running from shop to shop to find replacements for all of the stolen presents. What it means is that we can now actually make it in time for Christmas!” Chrissy explained.

Though Santa was not the keenest on understanding software, what he did understand was that a solution to his problem had been found. He thanked Chrissy for the delightful news and hung up the phone with a big cheery smile in his white beard.

“I wonder how far HUB is with building the new sled”, he thought to himself while hurrying to the elves’ house to find his Elf Manager.

“Ellie,” Santa called. If anyone could make ends meet, it was Ellie the Elf. TO BE CONTINUED…

Will Ellie be able to make ends meet? Will HUB be done with the sled in time? And will this ClaimShop thing really work? Get the answer in the final episode later this week.

Tell us all the names of the characters mentioned in today’s episode of a ‘Claims Handling Christmas Tale’ and get the chance to win another one of our awesome Christmas prizes.

Simply write your answer in the comments section here and you’re automatically part of the draw!