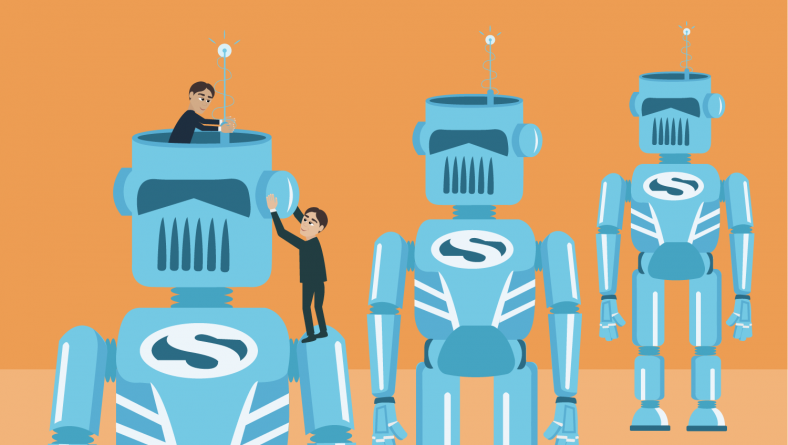 With the help of Scalepoint, Trygg-Hansa AB is moving towards a future with an ever-increasing amount of intelligent automation.

Magnus Carlsson, head of automation at the Swedish insurance company Trygg-Hansa, admits that he thought it was “pretty strange” when his bank began to accept million-kroner mortgage applications via a cell phone app. But that was before his own workplace began to use the same type of intelligent automation.

In 2013, Trygg-Hansa introduced its first ‘robot’, a computer programme known as CAI (Cabas Artificial Intelligence) who, as the name suggests, was endowed with a degree of man-made intelligence.

CAI went straight to work reviewing and processing motor damage estimates submitted by a variety of vehicle repair shops. Working on Trygg-Hansa’s existing digital platform, CAI could determine which estimates were immediately acceptable and automatically give the go-ahead to commence repairs. More complicated cases were diverted to a claims assessor for further review – an assessor precisely the right qualifications in terms of skills, available time and convenient geographical location.

Three years later, CAI got a ‘colleague’ named MAI (Meps Artificial Intelligence) who could do the same type of work in the area of building damage.

The intelligent automation solution described above was developed by Scalepoint and adapted for use at Trygg-Hansa. It was integrated into Trygg-Hansa’s existing software, and the two new ‘robots’ speak the same language as their end-users.

This means there is no need for an in-house IT staff to spend weeks or months developing new projects whenever Trygg-Hansa wants to change anything in its insurance portfolio. Trygg-Hansa’s advanced, cloud-based solution is hosted by Scalepoint, and Scalepoint can therefore quickly configure any necessary software changes.

An important aspect of intelligent automation is consistency. Human employees need to keep a myriad of requirements, prerequisites, conditions and special situations in mind when reviewing an estimate – or any other aspect of an insurance claim.

These parameters are the ‘rules’ that determine how CAI and MAI must react to a given piece of information. And while human employees have an empathy for their customers that the machines of course lack, the machines will never forget a rule, once it has been fed into the system. Every relevant rule is quickly and consistently applied. And if the rules need to be refined or changed, it can also be accomplished without time-consuming IT projects.

“That’s the beauty of the Scalepoint system. As end users, we have total flexibility and full control of our robots and our data,” says Magnus Carlsson. “We can quickly introduce anything at any time and launch it ourselves.”

Robots are getting smarter

Introducing new rules to refine the work of the Trygg-Hansa robots will over time enable them to handle more and more work – and send less of it to their human colleagues. After four years of ‘learning’ new rules introduced by human colleagues, CAI is already processing 70-80% of Trygg-Hansa’s auto repair estimates.

Meanwhile, MAI – who has only been working for Trygg-Hansa since 2016 – is currently processing between 30 and 40% of Trygg-Hansa’s building damage claims. Magnus is confident that this percentage will increase over time, and he also expects that this kind of automatic processing will spread to other tasks and other areas of Trygg-Hansa.

“Robots are getting smarter and smarter. And there’s no point in having highly-trained people spend time doing something that a robot can do automatically,“ he says.

In the end, Magnus Carlsson believes that the company’s robots will not just be learning rules – they’ll be learning how to create new ones:

“Machine learning is the next wave. Today there are special situations involving information that no robot can read. This is what we call ‘dirty data’. In the future, machines will be able to upgrade themselves, ‘wash’ these data and then be able to process them. And the company with the most ‘clean’ data will win.”

Trygg-Hansa is a Swedish-based  insurance company offering comprehensive non-life insurance to private persons as well as businesses. The company operates as a subsidiary of Codan  Forsikring A/S. It has over 2,300 employees and processes  around 500,000 damage claims per year.

Trygg-Hansa’s parent company is the international insurance group RSA, one of the largest non-life insurance companies in the world. The Group has branches in 140 countries, making Trygg-Hansa part of a worldwide network.

What is ‘intelligent automation’ ?

In a business context, intelligent automation consists of a software ´robot’ that can make decisions, predict outcomes and take actions based on a set of rules, variables and business information. Among other things, it can speed up business processes, save labour and ensure process consistency.